Griddle steak recipe In your kitchen without making a mess

Here is a problem most folks face if they don’t live in a climate where they can grill every day outside or if they simply don’t have the space for an outside grill and choose to grill or griddle inside. Not only will the smell from grilling settle in the whole house/apartment, but soon all furniture and other surfaces will be covered with a sticky, smelly oil film.


To avoid this, prep your steaks in the following manner:
Pre-heat your oven broiler to the highest temperature.
Pre-heat a cast iron grill pan or flat-bottomed cast iron pan until extremely hot. Season your steak liberally with sea salt. Brush lightly with peanut oil.
Put the steak into the pan and very quickly put it under the broiler on the highest shelf close to the heating elements.
Close the oven door and let the steak broil until your prefer redness has been reached.
All smells and fatty steam/smoke will be trapped inside the oven).
Don’t flip or turn the steak from the moment it hit’s the pan until it is cooked.
When done, remove steak to a plate at once (remember the carry over heat !), sprinkle with freshly ground black pepper and let rest for a few minutes before you cut it. You will be happy with the result. 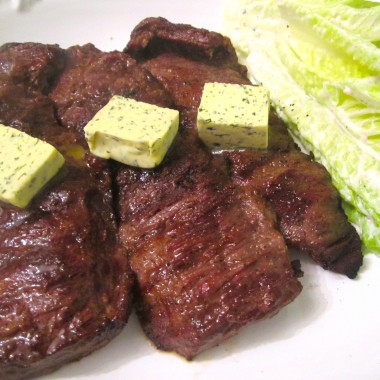 See all pic's and recipe at : www.ChefsOpinion.org