I dedicate  this dish to the city of  Riccione, where I had my first moment of culinary ecstasy. When I was 16 years old and an cook-apprentice in the  Black Forest  of Germany, I thought life, and particular working life, was too hard for me to handle, so I decided to run away from it. I hitchhiked through southern Germany to Austria and from there over the  Brenner Pass  in the Dolomiti Alps down to Riccione in Northern Italy in the hopes of finding happiness and love in a life of leisure on the beach (well, I was 16 years of age in an area before the internet – ignorance and naïveté prevailed in 16 year old’s at that time. When I left  Baden Baden  for my adventure I had 26.00 German Marks to my name, most of which I spend the first night on  steins of beer  in the “Englisher Garten”  in Munich. I remember I crossed the border from Austria into Italy with 6.00 DM in my pocket. After breakfast that day, it was four weeks of sleeping under the stars and asking (begging actually) shop owners and restaurant owners for donations to support, in the form of food and drink, my escape from a working life to the bohemian life of my dreams. These were different times altogether. I was a skinny kid without a home, and most people I met had pity and gave me a good meal, most often a sandwich and/or some fruit and soft drinks. Also, everyone offered a free smoke of the good stuff, which made a penny less life on the road so much brighter. However, I remember when I got to Riccione, on the first day I spend there, the chef in a seaside restaurant handed me a simple plate of pasta with shrimp. This was the first time I saw shrimp of that size and had a dish that was so exotic and wonderful, both in its taste and its looks. To this day I remember the awesomeness I felt by smelling this food, feasting on its looks with my eyes and then devouring it all in a happy flash. After one month of some happy, some frightening but never boring moments, even skinnier than before i left, but maybe just a bit wiser, I crawled back to my apprenticeship at the Hotel Wiedenfelsen, finished it and became a professional cook, never again to regret my earlier decision to follow this lifelong, tough, underpaid, but in so many other  way’s  rewarding career path of a cook and chef. 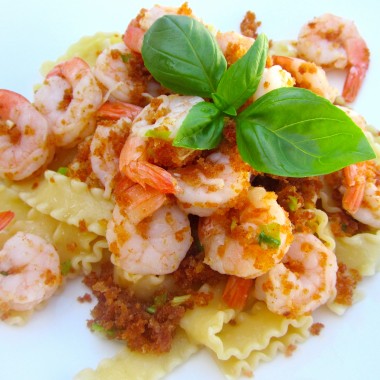 To see all Pictures, Recipes and Links, go to www.ChefsOpinion.org